The opening ceremony was attended by Vietnamese Prime Minister and Chairman of ASEAN 2020 H.E Mr. Nguyen Xuan Phuc, leaders of Vietnamese Party and State and foreign Ambassadors to Viet Nam. Deputy Minister of Culture, Sports and Tourism H.E Mr. Ta Quang Dong-a member of AIPA 41 Organizing Committee was also in attendance and directed the congratulatory arts performances to success at the opening ceremony. Leaders of the Parliaments of AIPA members and AIPA observers attended the event virtually from the bridgeheads in their own countries.

Addressing the opening ceremony, National Assembly Chairwoman of Viet Nam and President of AIPA 41 H.E Mrs. Nguyen Thi Kim Ngan emphasized that the 41 AIPA General Assembly would focus on reviewing and adopting Resolutions on the folloing issues: Promoting the role of Congresswomen in securing female workers' employment and income; Parliamentary Diplomacy for ASEAN sustainable peace and security; Parliament's role in promoting ASEAN economic cohesion and recovery after the COVID-19 pandemic; Strengthening the role of AIPA in building the ASEAN Socio-Cultural Community actively responsive to the COVID-19 pandemic.

Speaking at the opening ceremony as Chairman of ASEAN 2020, Prime Minister Nguyen Xuan Phuc affirmed the close cooperation between the Parliaments and the Governments of ASEAN Member States; and spoke highly of the spirit of solidarity and unity which had created synergy to cope with the Covid-19 pandemic,and of the efforts to overcome challenges and difficulties to maintain momentum in cooperation and connectivity in order to promote the successful implementation of the ASEAN Community Blueprint based on three pillars: ASEAN Political-Security Community, ASEAN Economic Community and ASEAN Socio-Cultural Communityand realize the ASEAN Community Vision 2025.

The Ministry of Culture, Sports and Tourism had been in charge of developing and organizing the arts program “AIPA-the beacon of faith” performed by artists from the Viet Nam National Music, Song and Dance Theatre; Viet Bac Folk Song, Dance and Music Theatre and other troupes. The program was a mixture of colors of quintessential arts and heritages of Viet Nam and other ASEAN countries, demonstrating friendship and hospitality of Viet Nam, the host of the 41st AIPA General Assembly. Along with arts performances of ASEAN countries and “AIPA-ASEAN” song which praised the companionship of AIPA and ASEAN throughout the journey of connecting the spiritual and intellectual strength of the people in Southeast Asia, delegates and participants got to enjoy and admire the beauty of unique cultures of the three regions of Viet Nam, the North, the Central and the South with UNESCO-recognized intangible cultural heritages through the opening performance “The country flowers”. 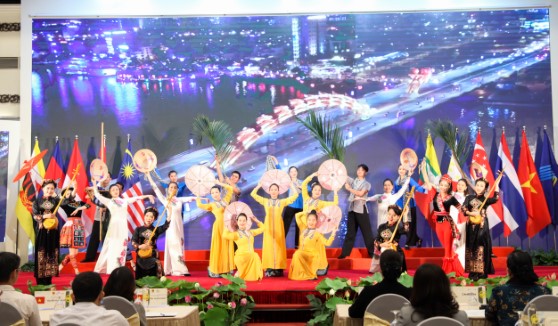 In preparing for AIPA 41, the Ministry of Culture, Sports and Tourism took charge as a member of AIPA 41 Information and Communications Sub-Committee. Acting as the focal body in realizing tasks given by AIPA 41 Organizing Committee and leaders of the Ministry of Culture, Sports and Tourism, the International Cooperation Department, from the end of the year 2019, started to collaborate with departments of the National Assembly and AIPA 41 Organizing Committee to implement communications works; develop AIPA 41 website; provide introductory information on Vietnamese culture to post on the website of AIPA 41; coordinate with the Department of Culture and Sports of Ha Noi to implement street communications and decoration; and to organize the arts program at the opening ceremony etc. Previously in July 2020, the Ministry of Culture, Sports and Tourism had coordinated with the National Assembly Committee for Culture, Education, Youth, Adolescents and Children and the Ministry of Education and Training to successfully organize the international conference “Parliamentary partnership on cultural and educational cooperation for sustainable development” in ASEAN cooperation.

According to the Agenda, the activities of AIPA 41 General Assembly will take place until September 10th2020 sticking to the theme of 2020 ASEAN Chairmanship “Cohesive and Responsive” and following the results of the 36th ASEAN Summit to demonstrate the companionship and cooperation of AIPA towards ASEAN in implementing ASEAN initiatives and priorities in 2020, and efforts to prevent, combat and overcome consequences of the COVID-19 pandemic; promoting safe restoration of economic activities; maintaining regional stability and development and promoting the leading role of the National Assembly of Viet Nam in AIPA concurrently, leaving a significant mark of Viet Nam on the overall development of ASEAN Community./.